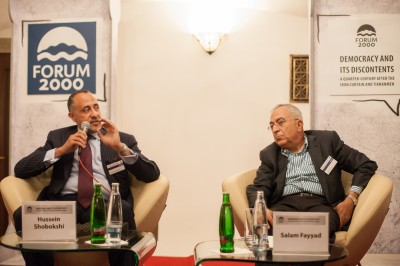 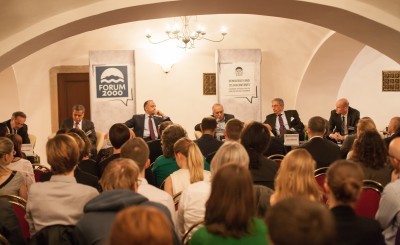 Moderator: Miroslav Dušek
Panel Discussion: Gilles Kepel, Falah Mustafa Bakir, Hussein Shobokshi,Salam Fayyad, Amre Moussa
Talk focuses on the significance of ISIS in the Middle East, and the ways in which it is symptomatic of larger issues.
Two questions were posed at the beginning of the panel. Firstly, why was there an element of surprise in the emergence of ISIS – how did we get here, and was it a consequence of the Arab Spring? Secondly, are we witnessing a juncture comparable to the redrawing of borders and rebalancing of powers after the disintegration of the Soviet Union?
Whilst ISIS is seemingly gaining traction as a world phenomenon, many of the panelists agreed that it will be a short-lived movement. The issues that gave rise to ISIS are, in actuality, more deeply rooted.
Hussein Shobokshi, businessman and columnist, and Falah Mustafa Bakir, Foreign Minister of the Kurdistan Regional Government, voiced their concerns about the international community and its intervention in Middle Eastern affairs; specifically, Mr. Shobokshi described the Middle East as being a“victim of hypocrisy,” from Arabs and Muslims internally, and from the internationally community externally.
Mr. Bakir described the Middle East as having a history of denial, issues of identity, a lack of democracy, and deeply-rooted dictatorial regimes. He questioned the effectiveness of revolutions in immature societies, saying that they are vulnerable to being “hijacked by extremists.”
The panelists generally agreed that Egypt would be a stronghold in the Middle East going forward. BothSalam Fayyad, former Prime Minister of Palestine, and Amre Moussa, former Secretary General ofthe Arab League, have agreed that the Middle East is moving towards a period of fragmentation. They noted that the question of Palestine needs to be addressed in order to make possible a new Middle Eastern system; a regional shift towards good governance, general reform and democracy, as well as a focus on the younger generation must emerge.